Mountains of Kerry in dawn light, from the Beara Peninsula, Ireland

I was lucky last spring to have the opportunity to spend considerable time in the Beara Peninsula, where the far south-west tip of Ireland pushes out into the wild Atlantic. Its a spectacular, wild landscape.  From a distance the land looks rugged, bare rocky mountains lashed by Atlantic gales. Yet, closer up, there are lush tree-lined lanes overhanging with fuschia; gardens with exotic plants from all around the world thrive in this temperate climate. And everywhere, constant reminders of our ancient past in one of the most megalithic-rich areas of Ireland.

The days developed into a gentle rhythm of work, gentle walks along the local lanes, and further afield by bike; closely governed by the weather and the ever-present wind.  The early spring days with their promise of calm and fresh growth were ripped away in one weekend as a hurricane tore in – it took two weeks for the blackened and burnt hedges to recover and turn green again.  I explored much by bicycle. The terrain can be challenging, especially on the minor single-track coastal roads which hug the landscape, a roller-coaster of steep ups and downs and tight bends.  One highlight was climbing the Healy pass on a stunning May morning, one of those days of rare clarity and intense blue sky. The pass crosses the Caha mountains from Lauragh to Adrigole, going from sea level to 285m in just a few km of twisting bends, offering tremendous views (along with sheep, gravel and sharp bends). 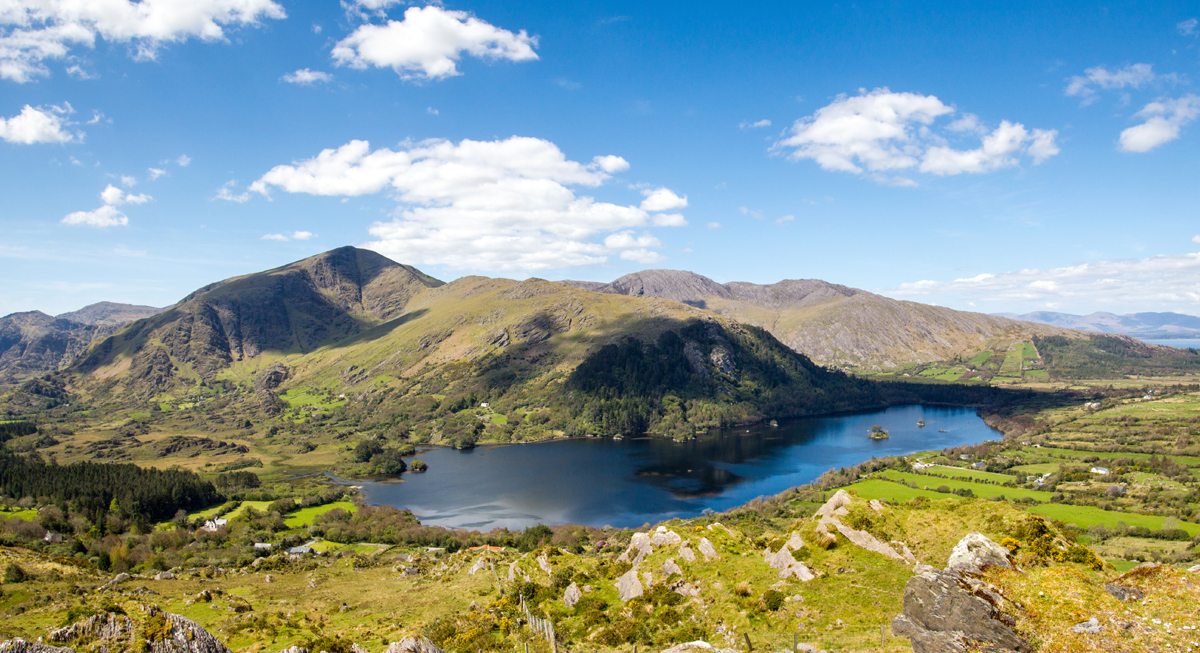 Glanmore Lake and the Caha Mountains from the Healy pass, Co. Cork

Above all, the peninsula has an abundance – many hundreds – of ancient monuments. I’ve made my way to quite a few over the years that I’ve been visiting. The dedicated monument-hunter must be an expert map-reader, and be prepared for seriously deep bogs, forestry plantations, animals and other hazards.  I can highly recommemend Jack Roberts’ guide, the Stone Circles of Cork & Kerry – he has dedicated his life to exploring and mapping these monuments. Luckily there are also some great sites closer to the road. 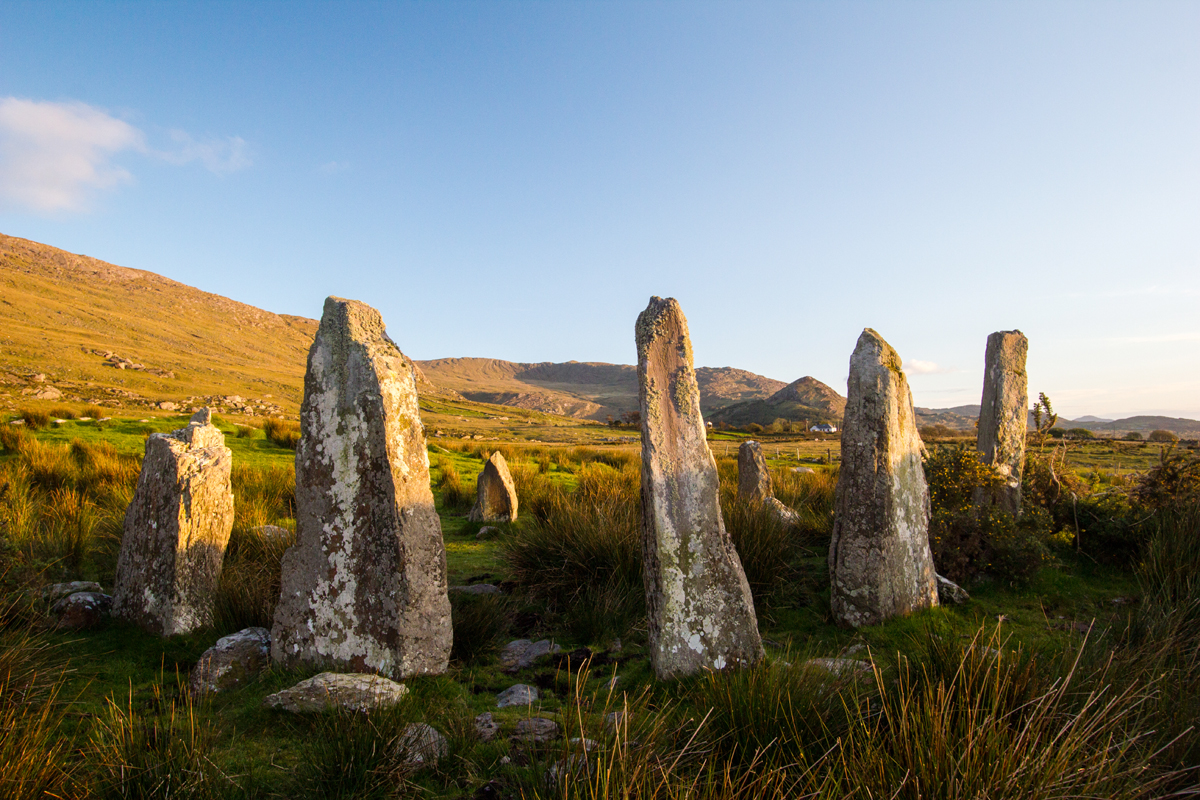 Now to switch subject, but prompted by these experiences.

As an energy-sensitive, I feel WiFi and mobile phone radiation (known as EMFs, for Electro-Magnetic Frequencies).  Luckily for me it is not crippling (as some feel),  but it does give brain fog, and head pains.  Being around a stronger WiFi gives constant feelings of panic, even palpitations.  It took me a long time to associate that these feelings were due to WiFi.  I have never been able to tolerate bluetooth at all – being near a bluetooth device gives instant severe brain fog and streaming eyes, while I scramble to find the ‘off’ setting.  There is now overwhelming scientific evidence (over 2000 peer-reviewed studies – here’s an index to some) showing the damaging effects to us, and to all life, of this radiation.  Most of us are going around our daily lives bathed in a sea of radiation which has long-term health effects, but because most of us don’t think we feel anything, we think its OK. This damage can easily have a ten-year latency period. Those of us who are sensitive are in a sense lucky as we have the chance to feel the effects energetically, and to take action.

Children are particularly vulnerable, as a five year old can absorb sixty percent more microwave radiation than an adult and exposures in bone marrow can be up to ten times greater.

On various trips to Ireland over several years I have usually stayed in places where the WiFi is turned off, and we have agreed to turn off all mobile phones in order to more readily sense the subtle energies in the landscape.  You really feel the difference on going back to ‘civilisation’, but before long you get used to living in ‘radiation soup’ once again.  Giving yourself a break from EMFs may be one of the best things you can do for your body, ideally a permanent one!  Our bodies are living in constant stress mode when exposed to this radiation.

The house I stayed in last year not only had ethernet (no WiFi), but we also had electrical isolation switches for each area of the house. The owner is super-sensitive not only to WiFi and mobile phones, but also to the electrical fields always present in modern houses.  The electrical ring main can give rise to high voltage fields throughout the house.  Basically, we lived with as little electricity use as possible, just turning on the circuit in the morning for a shower or for the cooker, using oil lamps, candles and rechargeable battery lights at night.  We kept a circuit on out in the utility area for charging devices.  This might sound extreme (although very cosy), but the difference in sleep quality was fantastic.  The shock on coming home to a ‘normal’ environment was also considerable and prompted me to start taking protective measures for myself, described below.

The challenge – and recommendations

Here’s the challenge: turn off your WiFi whenever you’re not using it, and certainly at night.  Try removing your phone, bluetooth and mobile devices from the bedroom, and switch your phone to airplane as much as possible.  Do this consistently for at least a week and see if you feel a difference.

If you are sensitive to EMFs, the above will help, but there is a wealth of advice on the internet for shielding your home.  A background in electronic engineering combined with my sensitivity gives me theoretical and direct knowledge of how EMFs work, and how to mitigate against their effects.  I’ll be posting more on this in coming weeks.