When I first read Alan Ereira’s book ‘The Heart of the Earth’, I never dreamed that one day I would follow in those footsteps, to be with the indigenous peoples of the Sierra Nevada.  It simply wasn’t on my radar as a remote thought or possibility.  I’d read his book shortly after it came out in 1990.  It told the story of the Kogi, an indigenous people living high in the remote Sierra Nevada mountains of northern Colombia.  When the conquistadors arrived, they were fisherfolk living on the coast.  They were peaceful, never fought back, and simply retreated inland; higher and higher into the mountains.  A remote people, hardly known by ‘civilization’.  They however, studied  us – and in the late 1980s after centuries of self-imposed isolation, their representatives contacted Alan, a BBC journalist, to come and make a film with them, about their way of life, their philosophy, but overwhelmingly about the effect that our society, our lack of consciousness really, was having on the planet.  They could see the damage being done to the Earth, and their film was an attempt to awaken and warn humanity to the danger.

Colombia then was still in the midst of the gruesome decades-long war between rebels, the government and drugs barons.  This further prevented the Kogi from access to their traditional lands, and added considerable danger and excitement to Alan’s journey.

They brought Alan back in 2012 to make a second film ‘Aluna’:
“The leaders of an ancient hidden civilization in South America want to show mankind how to avoid destroying the planet. They travel with an aging British film-maker and four hundred kilometres of gold thread to trace invisible connections in nature.”

Looked at on a map, the Sierra Nevada mountains are roughly triangular (heart-shaped), but like a pyramid with four sides.  There are four indigenous peoples, each inhabiting a different side, all sharing a common culture and philosophy.  The Kogi, the Wiwa, the Arhuaco and the Kankuamo, collectively referring to themselves as the ‘Older Brother’, with ourselves as the ‘Younger Brother’.  They consider it is their sacred duty to maintain the balance of the Earth, and as part of that to teach us about the Earth, about Spirit, about living in harmony.  They wish to be an inspiration to us so we can do what we can in our own lands to raise consciousness, so there is more care of nature.

The mountains themselves are clad in jungle from the coast up, then cloudforest, and finally the snowy peaks high above, at 18,000 feet.  The people know this sacred land as ‘The Heart of the World.

These people hold a reservoir of knowledge, directly handed down from ancient South American civilization.  They are highly spiritually evolved, living in harmony with Mother Earth, growing what they need and only using what is available naturally in their environment.  They live in balance.  Their society is guided by the Mamos, the shamans-doctors-counsellors, who wear white hats, symbolic of the snowy peaks.  Potential Mamos are identified at an early age, and raised in isolation, with special diet, in a special place.   The Mamos say ‘the worst teachers are adults, because they impose their own point of view.  The child loses the opportunity to discover the world through their own intelligence.‘   They are not given education in any normal sense, but guided to find their own interpretation of the world.  They learn to communicate with Nature, with Spirit.   Only after marrying and having families do some then go on to become Mamos (or Sagos, the female equivalent).

The Kogi maintain their isolation, high up in the mountains, while the Arhuaco have organised themselves more politically;  the Kankuamo have largely absorbed into the surrounding society, as their territory was the more accessible foothills.

The Arhuaco have regained some of their land in recent years, aided by the ceasefire and subsequent peace treaty, and the decline in the power of the drug cartels.  The fighting over decades had made it very hard for the people to travel in what was their own land, with many being forced off their land, the land damaged.   As I saw firsthand, where they have taken back land which was previously farmed, they are in the process of re-wilding, restoring vitality and the ecosystem.  Rather, they are simply allowing Mother Nature to restore herself.  At the heart of this is water.  The indigenous people revere water and consider it our prime duty to look after water sources.  However, the water systems of the Sierra Nevada are under great threat from hydroelectric dams, and from mining.  Although the people may hold title to their land, if minerals are discovered, then they have no legal rights and the mining will go ahead.

I was feeling disgusted by this corruption in the Colombian system – and came home to read about the current fracking operation which started this week in Lancashire, in England.  The local people and council have voted overwhelmingly not to allow fracking to go ahead – and been over-ruled by central government stepping in to bypass local democracy.  Protestors have been jailed.

The peoples of the Sierra Nevada are surrounded by 400+ mining operations, damaging the earth, polluting the water.  This is a deliberate assault on an area of high spiritual vibration, and I have pledged my support to do what I can to raise awareness about this situation.  If this assault succeeds in destroying the natural habitat and the people of the Sierra Nevada, the entire planet will feel the consequences, further down the road to environmental ruin.

It is our task to raise consciousness.  To act in reverence, giving thanks for life, and what we have.  To look after our patch of the Earth.  To hold ourselves in peace, the highest vibrational state.  As the Mamos said, Civilization has to re-define ‘progress’. 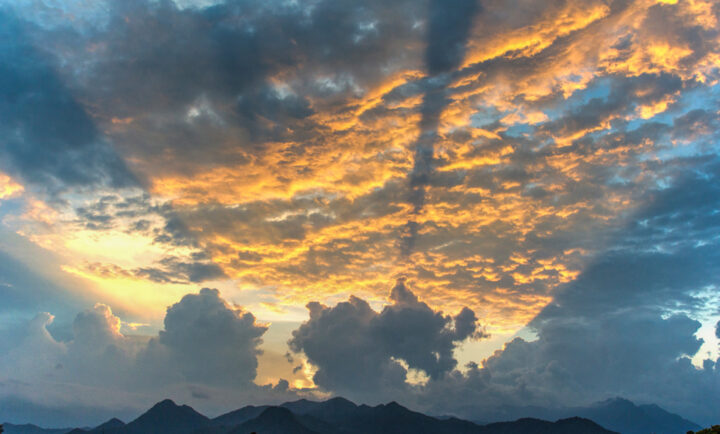 The night before departure – Sunset over the Sierra Nevada foothills, from Valledupar, Colombia

I received the invitation back in April – to travel to a meeting in the Sierra Nevada with the indigenous people to be held in September, to form a network with people from around the world.  Straightaway, I felt a deep connection, I felt in my body the anguish they have for the state of the Earth, and I knew we had to go.  The practicalities of that decision, however… Colombia felt like it was a no-go zone.  The reality of course, is completely different (apart from the third of the country where it is strongly suggested you do not go).  The peace treaty has been signed, and the various factions appear deeply committed to holding the peace, with investment flooding into the country.  The land is so beautiful, and the ordinary Colombian people amazingly so.  I have never met such friendly, vivacious, welcoming, warm-hearted people.  Delighted that you are there, delighted that you are enjoying their country, and, despite my embarrassing lack of Spanish, doing anything  to help you.

The travel was hard – a 30 hour journey from Glasgow to Bogota via new York, another plane trip to the north of Colombia, and finally a head and bottom-numbing stomach-churning 3-hour drive up into the mountains on dirt track, dodging boulders, crossing small rivers, bouncing off the sides of the van, hoping our luggage was still tied up on top.  All in the heat of the Colombian jungle.

And then we were welcomed into an Arhuaco community, who gave their huts over to us, sleeping in hammocks.  (I’d never slept in one before – Now I’m converted and want to throw away my bed.  Its the best back treatment going.)

The Arhuaco ask to respect their privacy: most of the photos I took in those 5 days are private.  But, I shall be sharing my understanding of their teaching and the effect that teaching, the journey, and the Sierra Nevada themselves, has had on my own consciousness.   As it filters through, like a jungle downpour through the roof.

3 thoughts on “The Heart of the World, Sierra Nevada, Colombia”