The Cairngorms to the left, the River Spey cutting through Rothiemurchus and Kinrara, and Loch Alvie to the right, from Craigellachie.

It had been overcast and cloudy, but I took a chance to climb Craigellachie, and was rewarded as the clouds cleared and the setting sun streamed across the land, turning the autumn colours to gold.

The hills were russet with the autumn grasses, and a touch of snow on the very tops as patches of light played across them. 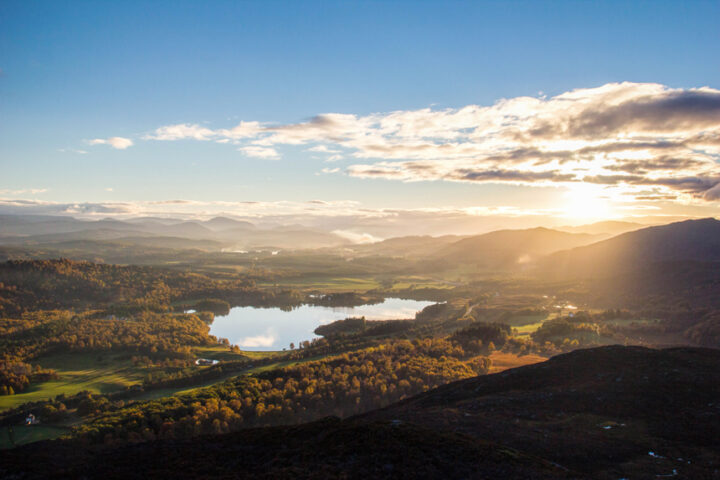 Recent issues of New Scientist have been featuring articles concerning the nature of reality, consciousness and the mind. There seems to be a growing scientific questioning of the nature of reality. Some scientists have come to a similar view espoused by mystics, that reality is largely an illusion, a hallucination, and that what we experience is a projection of our consciousness.

“Reality is merely an illusion, albeit a very persistent one.”
– Albert Einstein

I love sitting up on my Craigellachie viewpoint, and I like the metaphor also – it takes a bit of effort to get to, but, especially on a news-heavy day such as this, you can get above the everyday world and get a different perspective. Disconnect from the News, look out and see the beauty that is in the world, and give thanks for it. Go further, and bless the beauty that is still around us, in people and in nature, as a counter to the constant negativity hurled by mass consciousness at us and our beautiful planet.  Create a better illusion.