Beams of light pour from storm-clouds over Strathspey, from Ord Ban

Ord Ban is a great wee hill.  Its very steep, but the old Victorian-built path winds up gently, until the final section when there’s nothing for it but grit and determination!  Luckily its only a short steep section. Once on top, the views up and down Strathspey are tremendous, as can be the wind whipping across! 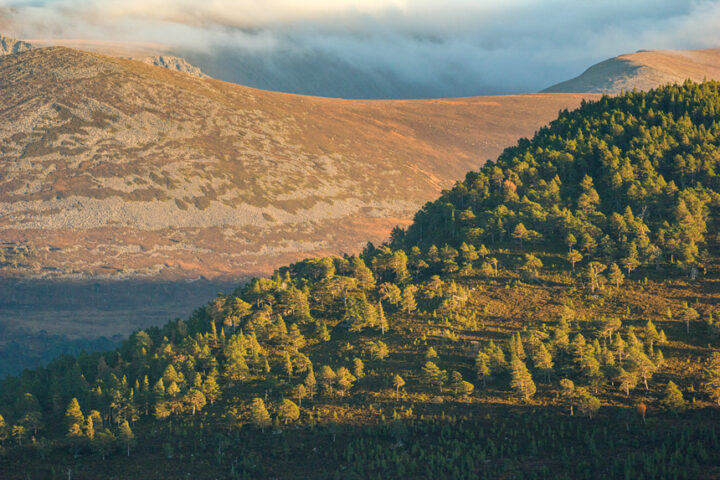 Cairngorms and upper reaches of Rothiemurchus forest, from Ord Ban

This was a couple of weeks ago, when it had been a wonderful sunny autumn day all day.  I went up  Ord Ban expecting a sunset, only to see the sun sink into a massive cloud-bank in the southwest which had been hidden whilst climbing.  The wind was also giving a good foretaste of winter.  I settled down behind a convenient boulder and waited a while, and was suddenly rewarded as beams of light like giant searchlights swept out from behind the clouds.  For a few minutes I had a dazzling fiery light-show, and then, the sun was gone, and dusk was coming on.

I’ve been delving once more into my favourite topic, out on the edge of physics where it is beginning to be realised that consciousness has to be a part of the equation, where physicists use language akin to that of Zen masters  (and just as hard to fathom), and that the universe might just be a gigantic thought-bubble.

“There is broad agreement today, bordering on unanimity in the avenue of physics, that the stream of knowledge is moving toward a non-mechanistic reality; the universe is beginning to look more like a mighty idea than a machine.  The spirit no longer seems to be a casual trespasser in the territory of matter.  We are starting to presume that we should rather welcome it as creator in the field of matter.”
– British physicist, James Hopwood Jeans